The Upper Mississippi River Restoration (UMRR) program integrates a broad range of restoration techniques that strive to use or mimic the river’s natural processes to enhance and protect important fish and wildlife habitat, restore the river’s floodplain structure and function, and counteract the factors degrading the river’s ecological health.  Since its inception in 1986, 35 years ago, UMRR has matured into a highly effective federal-state restoration program that provides significant return on the nation’s investment, with over 110,000 acres of new or improved fish and wildlife habitat.  Analysis of UMRR’s long term resource monitoring data has provided a much clearer understanding of the complex, dynamic relationships among various ecosystem components and watershed drivers.  There is clear evidence that the program’s habitat restoration projects have improved the ecosystem, with clearer water, more vegetation, and increased fish and wildlife populations.

UMRR’s restoration techniques are tested and proven to address the most significant degrading influences to the ecosystem by:

UMRR’s long term resource monitoring (LTRM) effectively and comprehensively combines monitoring, research, modeling, and data management, providing critical information about the status and trends of key ecological resources.  The LTRM database in one of the most extensive and comprehensive data sets on any large river system in the world. The information is used extensively by resource managers, planners, administrators, scientists, academics, and the general public, enhancing management actions and scientific investigations on the river. The longevity and scientific integrity of LTRM's dataset is crucial for making conclusions about recent and long term trends in indicators of management success, cyclical changes in important ecological components, and the status of indicators used for analyzing relationships among components.

UMRR is specifically focused on enhancing the Upper Mississippi River's ecological health and resilience through innovative restoration solutions and by better understanding the complex and dynamic nature of the river ecosystem.  These actions are set forth in UMRR's 2015-2025 Strategic Plan and 2016 Report to Congress, with supporting documents as follows:

Monitor and research the river ecosystem

UMRR operates through a truly unique and remarkable partnership infrastructure that can be traced not only to the program's origins with the Upper Mississippi River Basin Commission, but also to UMRR's 1986 authorizing legislation, which directs the Corps to implement UMRR “in consultation with” the Department of the Interior and the five basin states.  The region has a rich tradition of interagency partnership that EMP has been fortunate to be able to build upon and nourish.

As the federal agency authorized to implement UMRR, the Corps is accountable for management and execution of the program. The UMRR Coordinating Committee serves as the system-level consultative body for interagency coordination to discuss and seek consensus on UMRR budgetary and policy matters as well as priorities and issues regarding habitat restoration, scientific research, and monitoring. UMRR also has standing and ad hoc coordinating groups for partners to discuss technical implementation issues related to LTRM and HREPs.  This thoughtful and meaningful coordination has been vital to the program’s success and now serves as a model for other regional, national, and international ecosystem restoration programs.

To provide more detailed scientific guidance on LTRM implementation, another interagency committee called the Analysis Team, or “A-Team,” was formed. This team provides science and technical advice and recommendations on LTRMP work priorities, annual work plans, and research activities.  The team is comprised of biologists and other technical staff from federal and state agencies.

UMRR authorizing legislation designates the Upper Mississippi River Basin Association as the “caretaker” of the Master Plan.  As such, major UMRR policy and budgetary issues are often addressed in this forum; and the Association has a longstanding commitment to the program’s successful implementation.

The public participates in UMRR through the involvement of local governments; sport, conservation, and industry non-governmental organizations; and individual participation.  The public was very engaged in the original UMRR authorization and has continued to influence the program by providing input and monitoring the implementation of both habitat projects and LTRM.  Public involvement ranges from providing comments on specific project proposals to engaging in more regional, program-level matters coming before the UMRR Coordinating Committee.

UMRR's authorization in 1986 marked the culmination of a controversial debate surrounding replacement of L&D 26. In the 1970s, a proposal to replace L&D 26 and increase its capacity sparked considerable debate and protracted litigation. Environmental groups and Midwestern railroads were particularly opposed to the proposed construction of twin 1,200-foot locks because it signaled the federal government's commitment to navigation on the river for another 50 years. Seeking to balance this concern with the navigation system needs, Congress, in 1978, authorized construction of a new dam with a single, 1,200-foot lock and directed the Upper Mississippi River Basin Commission to conduct studies and make recommendations related to the potential for further navigation capacity expansion and its ecological effects. In 1982, the Commission presented its findings and recommendations in a landmark document, the Comprehensive Master Plan for the Management of the Upper Mississippi River System. Click here to view the report.

Ultimately, Congress authorized key elements of the Commission's recommendations as part of WRDA 1986 (Public Law 99-662), including a second 600-foot lock at Lock and Dam 26 and a package of environmental authorities collectively known as UMRR. Congress authorized a truly unique federal-state partnership with direct guidance to the Corps to implement UMRR with specific responsibilities for the Department of the Interior and the states of Illinois, Iowa, Minnesota, Missouri, and Wisconsin. Other provisions of Section 1103 provide both context and statutory direction regarding implementation of UMRR.  Of particular note are the provisions that:

In contrast to the typical Corps project, for which reconnaissance and feasibility studies precede construction authorization, UMRR had no prior Corps planning documents.  The Master Plan prepared by the Upper Mississippi River Basin Commission was the foundation of the 1986 UMRR authorization but was relatively conceptual in nature.  Thus, UMRR is truly a program, not simply a collection of authorized projects.  Project planning is much a part of UMRR as project construction. In January 1986, the Corps published a foundational document entitled the General Plan to guide UMRR implementation.  That document was followed by six Annual Addenda, each of which provided programmatic and policy updates, individual project status reports, and recommendations for out-year funding and schedules. In August 1992, the Corps prepared a Midterm Evaluation Report that set forth UMRR accomplishments and recommended continued funding.

The original UMRR authorizing legislation has been amended five times since its enactment. Section 405 of WRDA 1990 (Public Law 101-640) extended the original UMRR authorization period an additional five years through FY 2002.  Section 107 of WRDA 1992 (Public Law 102-580) included amendments that 1) allowed some limited flexibility in how funds are allocated between habitat rehabilitation and enhancement projects (HREPs) and long term resource monitoring (LTRM) components and 2) modified the cost sharing provisions to assign sole responsibility for HREP operation and maintenance to the agency that manages the lands on which the project is located.

The most important change, reauthorizing UMRR as an ongoing and expanded program, came in Section 509 of WRDA 1999 (Public Law 106-53, with corrections made in Public Law 106-109). The groundwork for UMRR reauthorization in WRDA 1999 was laid in 1997, when the Corps of Engineers’ Mississippi Valley Division, with the support of the other UMRR partner agencies, transmitted the Report to Congress:  An Evaluation of the Upper Mississippi River System Environmental Management Program.  That 1997 Report described the accomplishments of UMRR's first 12 years, set forth the partner agencies’ vision of UMRR's future, and described the broad public support of UMRR. Congress responded to that report and public input by reaffirming its support for UMRR, using WRDA 1999 to reauthorize UMRR as a continuing program and increase annual authorized appropriations to $33.17 million, an increase of $14.215 million.  In addition, WRDA 1999 increased UMRR's non-federal cost share from 25 percent to 35 percent of total habitat project cost, called for a UMRR independent technical advisory committee, and directed the Corps to develop a “habitat needs assessment.”

In 2004, the Corps, in coordination with the other UMRR partner agencies, completed a second Report to Congress that focused on the program’s maturation and accomplishments since the 1997 Report to Congress; described challenges to program implementation; and offered recommendation to Congress, the Corps, and partners regarding legislative, administrative, and policy adjustments. The Report concluded that Congress, through legislation and funding, had provided UMRR's partnership with the necessary tools to establish a successful restoration and scientific program, improving the health and our understanding of the Upper Mississippi River System.  Table 1-1 summarizes recommendations from the 1997 and 2004 Reports and their outcomes.

When UMRR began in 1986, it included six elements.  However, its current focus is on the two components that have been its essence from the beginning:  habitat rehabilitation and enhancement projects and long term resource monitoring.  In WRDA 1999, the authority for a computerized inventory and analysis system was merged with the monitoring program and applied research was explicitly added, thereby making official what has been the administrative reality since UMRR's inception.  Other components of the original UMRR program have either been completed or are not being pursued.  In particular, the authority to construct recreation projects expired at the end of the 15-year authorization, having never been used in any significant extent because successive Administrations deemed recreation projects to be a low federal priority.  While the authority to monitor navigation traffic movements had no expiration and thus remains intact within UMRR legislation, it has not been employed since 1990.  Instead, the Corps conducted extensive traffic analyses as part of its 2004 Upper Mississippi River – Illinois Waterway System Navigation Feasibility Study.  The Navigation Study ultimately resulted in the authorization of the Navigation and Ecosystem Sustainability Program (NESP), an integrated package of small- and large-scale navigation improvements, including the construction of seven new 1,200-foot locks, and a broadly-based series of ecosystem restoration measures.  Finally, the authority to undertake a study of the economic impacts of recreation was deleted by WRDA 1999, having been completed in 1993. 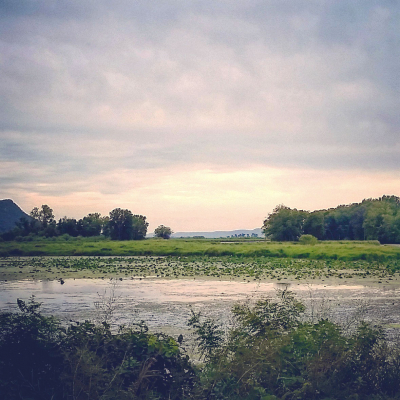 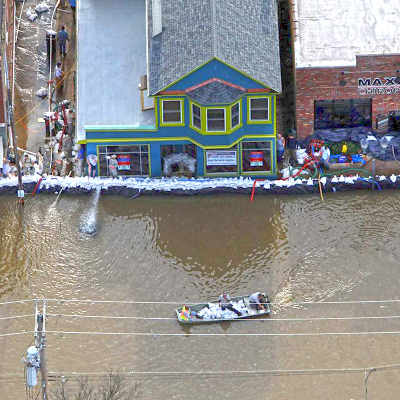 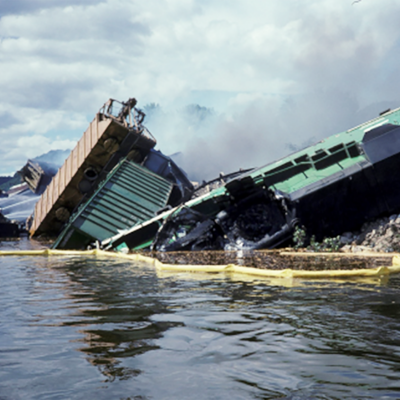 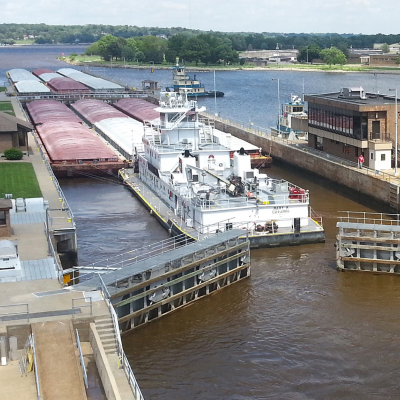 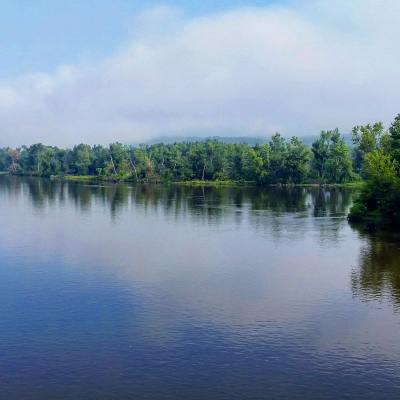